We got to the stadium kind of late, so I wasn’t able to get a pre-game throwing ball.

The game was between the Pawtucket Red Sox and the Red Wings. As you know, I love the Red Sox, and this was my first game seeing the AAA afiliates to the Sox. I had seen two previous MLB Sox games.
Right after the National Anthem, the PawSox were heading into the dugout except for Lars Anderson. He had a ball and looked like he was pointing to 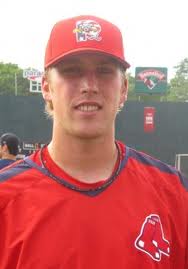 someone else behind me, but I realized he was pointing at
ME! So when I made eye contact and held up my glove, he tossed it to me. WWWWeeeeiiirrrrddd.
This was probably one of the wierdest balls I’ve gotten.
Anyways, the game itself was actually one of the most boring games I’ve ever seen. The final score was 6-3 PawSox. I can see why people think baseball is boring but someone once said “Baseball is dull only to dull minds” someone also said “Baseball is like church; many attend but few understand.” Someone also said “It’d probably be a good idea to stop with all the quotes.”
There were a bunch of lefties in both team’s lineup, so I went into foul ball prone territory for a couple innings, but nothing. I was debating to either go to where the umps exit for a ball, or go to the dugout for a lineup card. I decided to go for a lineup card- and on my way there in the top of the 9th, a security person looked at my shirt (which was dark blue) And asked what my name was. I told him and he just kept walking. I thought about what that could be about, so I decided to stand on the asle that goes across the stadium than go sit by the dugout just so that if the security people knew who I was and wouldn’t kick me out of the section.
At the end of the game, no luck at the dugout.
BALL TOTALS:

-1 ball at this game