If you can’t see that- it’s raining on my way to Detroit… Obviously stating that batting practice was canceled- right?

YES! They are pulling of the tarp- hey by the way what time is it? Oh- 6:30. 1/2 And hour till game time. Never mind. No batting practice.
Yesh.
That’s pretty much how my day started off in the car and at Comerica Park. (PS- I have no idea why those two lines are blue.) So after I realized batting practice was completely canceled,
I went back to my seat. It looked like this:

Not bad for foul balls, right?

Not a single foul ball the entire game and after. And there was no BP. But did I ever say the game started? No…
SO I went over to the Indian’s bullpen where starting pitcher Josh Tomlin was warming up.

(He’s the one who is with the white towel. I think) Anyways, while he was warming up outside of the bullpen, he kept nodding at me (I was holding my glove up the whole time). At least i thought he was nodding at me as if to say, “Don’t worry you’ll get a ball.” So he went back into the bullpen, and there were a couple other kids next to me. One was wearing an Indians hat. Uh-oh.
Let me say something first: the promotion for the game was Miguel Cabrerra hats. Two other kids who where by me where wearing those hats, and the kid with the Indians hat was standing next to his brother who was wearing the Tiger hat.
Literally two seconds before the game started he started to leave the bullpen. I stupidly forgot to bring my rosters with me, so I called out “Right here” either that or I didn’t say anything. He very quickly just flipped it to me.
During the game I got some action shots: 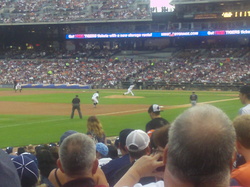