There was rain in the forecast. The night before this day ended cloudy and rainy. When I woke up, it was still cloudy and looked damp. When got to the stadium, this is what it was like:

OHHH YEAH! THE WEATHER GODS LOVE ME!! (FYI, all the pictures of the stadium were taken by me).

Anyways, I only had about 5 minutes at my seat before I had to get down to business. The players started playing catch.

I ended up getting a ball from Toby Gardenhire (son of the Twins manager Ron Gardenhire). He flipped it right to me without hesitation, unlike this day where I missed out on a ball because it was too clean. I have a feeling that some of the Wings are beginning to recognize me. It might be just me, but my conscience was wondering why Toby seemed so “happy” about it. Maybe he was anticipating me asking someone for a ball. I don’t know. This is just one of my weird conscience moments.

Attendance was not the worst I’ve seen, but it was close. Here’s the stadium 10 minutes before the game:

I stayed in my seat for half an inning, and after that half inning I tried for a third-out ball, but the 3rd out was a strikeout.

After getting a hot dog (which was very hard to eat seeing as I just got braces on the Monday before this game), I sat in the right field grass. The only people in that area were the family (a father with a glove and a mother). It was foul ball heaven, but nothing came my way.

I did move back to right field where a foul ball was shot up the line, but there was a swarm of little kids screaming for it. I decided to let them have their fun and get the ball.

In the 9th inning I speed walked over to the umpire’s tunnel and climbed over rows of seats and got a ball from the home plate umpire Travis Brown. Then I made my way to the Red Wings dugout (who won 7-2). I asked a guy (might of been manager Tom Nieto) for a lineup card when he took it off the wall, and he gave it to me! My first lineup card. Awesome sauce. 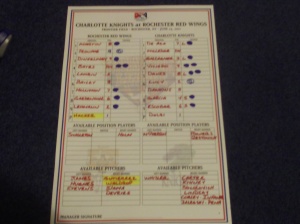 Anybody know what the blue dots mean?

Also, I apologize for the large number of pictures. I went a little camera-happy. There’s some more at the end of the post.

-Games attended: Approx. 16 (where i’ve tried to snag a ball)

In the photo above, see all the people crunched into the the premium seating? Now imagine all of those people move to the “upper” deck. Yeah. That’s what happened when it started to SPRINKLE.